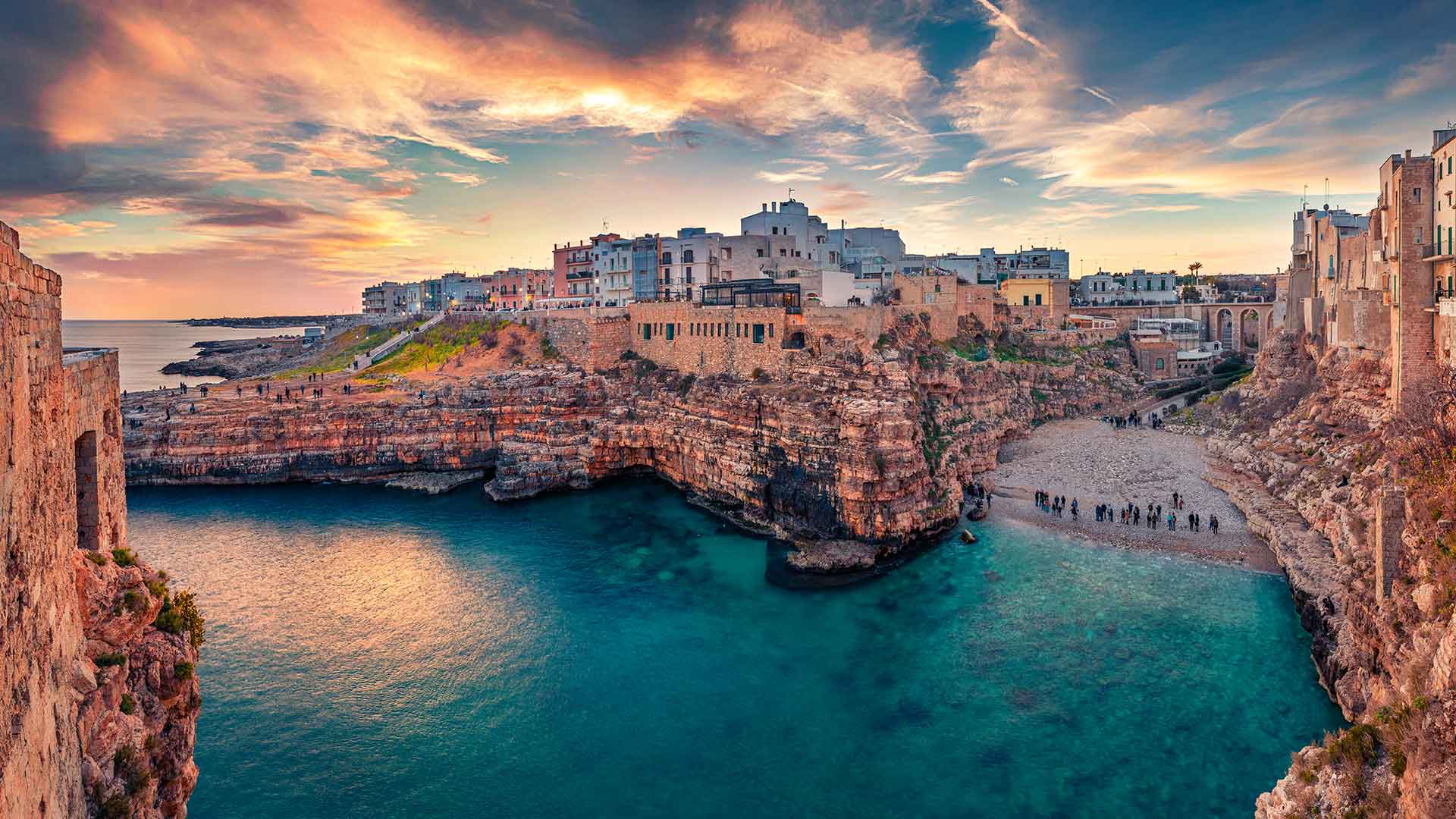 Towering cliffs, mysterious caves, ancient ruins and water so calm and crystal clear you can see the rocks on the seafloor below.

Prepare to have your mind blown every glorious day when sailing the azure Adriatic Sea. With its dramatic coastline and plethora of islands, bays, beaches and coves, it is a serene sailing paradise made for languid ocean exploration.

The Adriatic Sea is situated in the northernmost part of the Mediterranean, with coasts on Italy, Slovenia, Croatia, Bosnia, Montenegro and Albania.

Small and protected (the Adriatic Sea is only 770 km long) with mild weather patterns, the Adriatic has a unique character. Its tranquil waters, resplendent natural beauty and excellent climate make it a safe and serene summer sailing destination.

Here are 4 amazing hidden sailing spots in the Adriatic that are perfect for exploration by yacht or catamaran.

The Brijuni Islands are a cluster of 14 small islands located off Croatia’s Istrian Peninsula in the northern Adriatic. Rich in natural beauty, the Brijuni National Park Islands also boast a storied past.

A region of the Roman Empire

In 178 BC, Istria was conquered by the Roman Empire to become its second-most important region, after Rome. The area produced wines and olive oil (it's said that the Romans considered Istrian olive oil to be the best in the Empire) and remnants of its Roman heritage are still to be found all over.

Mali Brijun and Veliki Brijun are the two largest islands, famous for their abundance of fauna and flora. The islands make fascinating destinations for a few days of island exploration among ancient ruins and gorgeous natural scenery.

On Veliki Brijun you can enjoy the sight of wild peacocks and jackrabbits roaming around ancient coastal Roman ruins. Rent a bicycle to explore, or board a small train that will take you around the island.

Veli Brijun famously used to be the summer residence of Josip Broz Tito, president of the former Yugoslavia and the exotic animals in the island’s safari park are descendants of those donated to Tito by statesmen from all over the world.

While sailing this region, be sure to drop anchor and pay a visit to Pula, a historic city situated on the tip of the Istrian Peninsula. Pula has a rich history and is most famous for its Roman amphitheatre built in 27-68 AD. An unforgettable sight, the structure is one of the six largest surviving Roman amphitheatres in the world.

The entire Istrian Peninsula, with its astonishingly beautiful coastline, was made to be explored by yacht or sailboat. Don't miss out on the hidden Adriatic sailing gem that is the cluster of Brijuni islands.

One of the most remote inhabited islands in the Adriatic Sea, Lastovo Island is situated on Croatia’s central Dalmatian archipelago. The island is known for its stunning natural beauty and absence of large, touristy crowds.

Romantic Lastovo Island and its surrounding islands form the Lastovo Islands Nature Park. With 70% of its surface covered in forest, the island is said to evoke feelings of

“old Croatia”, before the country became a popular tourist destination.

Lastovo Island is also famous for its 15th- and 16th-century Venetian architecture, scenic seaside routes, quaint markets, pretty vineyards and olive groves. The small village of Skrivena Luka in the south is a perfect spot to drop anchor, as it is protected from wind and very secluded.

For a memorable feast, anchor in the protected bay of Zaklopatica in the north and visit one of the many restaurants offering a selection of mouth-wateringly fresh seafood dishes.

With its inspiring architecture, rich history and incredible natural beauty (and did

we mention, lack of crowds?) Lastovo Island and its surrounding regions should be a must-sail destination on your Adriatic itinerary.

Montenegro boasts 300 km of stunning Adriatic coastline. In the Bay of Kotor, located in northern Montenegro, lies the picturesque town of Perast.

Perast has often been described as “a mini Venice”. With its Italian-style churches and palaces, it makes for an unforgettable sight when approached by yacht or boat. In its heyday, Perast was a prosperous shipbuilding town brimming with wealthy merchants living in ornate palazzos on the waterfront. Today it is a protected, car-free zone, so drop anchor in the bay and explore this Adriatic jewel on foot.

A human-made island in the bay

In the bay, out from Perast, lie St George and Our Lady of the Rocks, twin islands that are also religious pilgrimage sites. Our Lady of the Rocks is a human-made island founded more than half a century ago. Legend has it that sailors noticed an image of the Virgin Mary on a rock in the bay and kept adding rocks every time they sailed past, eventually creating an entire island over time.

Often compared to the coastline of Norway for its dramatic, fjord-like cliffs, the mesmerising Bay of Kotor forms part of a Unesco World Heritage site. The region is perfect for exploration by yacht, sailboat or catamaran and the city of Kotor’s old town is one of the best-preserved medieval cities in all of south-eastern Europe.

Churches, cathedrals and a cats museum

Built between the 12th and 14th centuries, Kotor’s old town is home to many fantastic museums, medieval churches, cathedrals and palaces. If you are a cat lover, don’t leave this city before exploring its fascinating Museo del Gatto di Cattaro, or Cats Museum.

If breathtakingly dramatic natural scenery and the sights and remnants of old,

medieval Europe are of interest to you, definitely add Montenegro’s Bay of Kotor to your list of places to explore in the Adriatic Sea.

Albania's Karaburun Peninsula is a region of exceptional natural beauty and biodiversity, with an abundance of hidden sailing spots to explore by yacht.

Where the Adriatic meets the Ionian Sea

A former militarised area that has only been open to the public since 1994, Albania’s Karaburun Peninsula is enveloped by the Adriatic Sea in the north and the Ionian Sea in the south. The peninsula’s Mediterranean climate and calm, translucent waters make this region a particular pleasure to sail.

125 km2 and boasts a spectacular diversity of wildlife. It is home to several endangered species, including the green and loggerhead sea turtles, as well as the Mediterranean monk seal, the rarest seal species in the world. If you enjoy birdwatching, keep the binoculars handy when sailing in this region, as the park is also home to 105 bird species.

The Karaburun-Sazan National Marine Park’s ragged coastline is home to countless hidden coves, as well as 20 stunning limestone caves, offering some of the most unforgettable diving on the planet. There are also ruins of ancient Greek and Roman ships to explore and countless secluded beaches and bays to discover.

A journey back in time

While sailing the area, be sure to visit uninhabited Sazan Island for a day of exploration. This beautiful island is an abandoned military enclave, deserted since 1992. Peek around the remains of a crumbling old “ghost town” and explore what remains of Mussolini’s former summer villa while enjoying the most incredible views of the island. Just a heads-up, as the Karaburun-Sazan National Marine Park is situated close to military bases, you may need permission to enter certain areas by sailboat or catamaran.

A swim in a pirates’ cave

Another mind-blowing attraction not to be missed in the park is the Cave of Haxhi Ali. This stunning limestone cave is rumoured to have once sheltered pirates and their loot, adding to its mystery and allure. If you are on a small boat, you will be able to sail into the cave and even take a dip in its crystal clear (if somewhat chilly) waters.

These are but four of the Adriatic Sea’s many stunning hidden sailing destinations just waiting to be explored. The beautiful Slovenian town of Piran, with its long pier and Venetian charm, is most definitely worthy of a visit too, as is the picturesque town of Neum, situated on Bosnia's sparse 20 km stretch of coastline. While not so hidden away, these are two outstanding sailing destinations in their own right and definitely worth a visit when sailing the region.

When planning your next sailing adventure, remember the calm, clear and serene Adriatic for an unforgettable Mediterranean sailing experience.