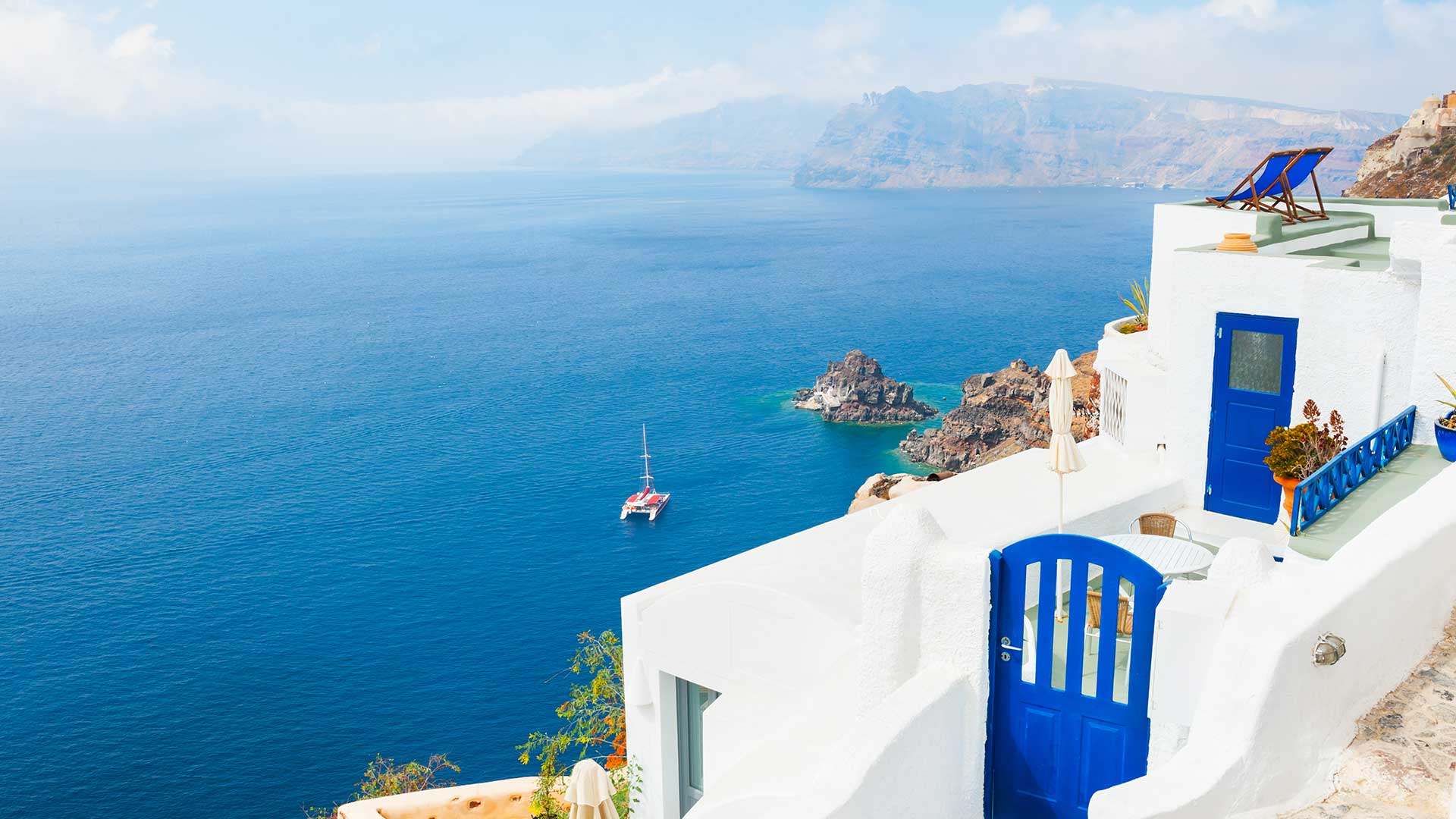 With its incredible natural splendour, excellent climate, rich cultural heritage and many beautiful anchorages, it‘s easy to see why the deep and mysterious Aegean Sea remains one of the world’s most popular sailing destinations.

In the summer months, hundreds of boating and sailing enthusiasts set sail to explore the azure waters of the Aegean. Embraced by the Greek and Anatolian peninsulas, the region is often referred to as the cradle of western civilization.

Deciding where to sail in the Aegean Sea can be somewhat overwhelming, as there are so many amazing destinations in this region. Some popular sailing spots in the Aegean Sea include the historic Greek peninsula of Attica, the islands of the Greek Cyclades and the western coastal region of Turkey.

With stunning coasts on Greece and Turkey, the Aegean Sea is home to 1415 islands and islets. Think submerged ruins in turquoise waters, ancient clifftop temples and millennia of history and mythology – all set amongst the backdrop of the glorious, sunny Mediterranean.

Attica (also known as the Attic peninsula) is a historical region that encompasses the Greek capital of Athens. With its abundance of historical sites, Attica’s history is closely linked with Athens and the Golden Age of Greece (500-300 BC).

The Acropolis of Athens

When sailing around Attica, a visit to the Acropolis of Athens is an essential stop on your itinerary. At the ancient hilltop citadel, you can take in the wonders of the Parthenon, the Propylaea, the Erechtheion and the Temple of Athena Nike.

The Attic peninsula is also famous for its many gorgeous marinas. Be sure to drop anchor in the much-awarded Flisvos Marina, only 6 km from central Athens. Other blue flag marinas on the Attica peninsula include the Olympic Marina, Agios Kosmas Marina and the Alimos Marina.

Another must-see site in Attica is Sounion, situated on the southernmost tip of the peninsula. Here you can visit the temple of Poseidon, the ancient Greek god of the sea. Perched high above the ocean on the cliffs of Cape Sounion, the breathtaking temple is steeped in history and myth.

Sounion also has a beautiful bay that is perfect for swimming, snorkelling and enjoying the glorious Mediterranean weather.

If you are in search of a Greek island close to Athens to explore, look no further than beautiful Aegina. Situated only 17 nautical miles from Athens, you can set sail from Piraeus and drop anchor in Aegina harbour on the northwestern coast of the island in under an hour.

Aegina, the island closest to Athens, offers some incredible historic ruins, including the Doric temple of Aphaia (5 BCE). After visiting the temple, walk down to the sandy beach of Agia Marina and enjoy a swim in its turquoise waters. 5 km southeast from Aegina Town is Marathon beach, a pretty, secluded beach that’s not too crowded during high season.

Don’t set sail from Aegina before strolling through the streets of Aegina Town. Explore its bustling markets and have a drink in one of the lively tavernas. While you’re there, sample some of the island’s delicious pistachio nuts – Aegina produces more than 600 tons of the delicacy annually and it is said to be the best in the world.

The Cyclades (meaning “circular islands”) is the most famous of all the Greek islands. The group of 220 islands (including Mykonos, Santorini, Naxos, Paros and Ios) form a circle around the sacred island of Delos, a UNESCO World Heritage Site and said to be the mythical birthplace of Apollo, the ancient Greek sun god.

The islands of the Cyclades comprise a region of great cultural significance, steeped in myth with a history spanning millennia. It is also a region of wildly diverse landscapes, abundant marine life and exceptional natural beauty.

An island in the mouth of a volcano

The sundrenched Cyclades make for perfect summertime island-hopping adventures. Volcanic Santorini (officially Thira), the most popular Greek island, is the southernmost island of the Cyclades group. The remnant of a volcanic caldera, Santorini is famous for its sunny white- and black-sanded beaches, quaint blue-and-white villages built along steep hillsides, warm turquoise waters and vibrant nightlife.

Sail around the flooded volcanic crater that is the Santorini caldera and drop anchor at volcanic Nea Kameni to take a dip in the island’s hot springs. Sail on for swimming, snorkelling and exploration at Perissa or Kamari beach, two of the island’s black-sanded beaches, before taking in a famous technicolour Santorini sunset.

Other popular islands of the Cyclades include beautiful Paros with its myriad Byzantine footpaths, Ios with its 365 churches and amazing Cycladic architecture and Amorgos, known for its exceptional hiking trails (and famous for being one of the filming locations of the movie The Big Blue).

Islands unique in culture and character

What makes sailing the Cyclades so memorable is that no two islands are alike. With varying climates, coastlines and geographical characteristics, every island has a unique culture and character.

When sailing this region, get ready for an unforgettable mix of beautiful scenery, ancient history, fantastic food and lots of summertime fun.

The Greek islands are all about letting your hair down, soaking up the glorious sunshine and immersing yourself in the unique culture that is Greek island life.

The Aegean’s Turkish coast is a supremely beautiful corner of the world, an aquamarine wonderland that oozes history and culture. This stunning region, with its plethora of gorgeous beaches, coves and historic ruins is as close to sailing perfection as it gets.

Drop anchor overnight at Cleopatra’s Baths near the southwestern city of Fethiye, where you can swim among the ancient submerged Roman ruins. Then set sail along Turkey’s Turquoise Coast towards the vibey port city of Bodrum.

Also known as Turkey’s St Tropez, the beautiful city of Bodrum is a trendy yachting port, especially in the summer months, when many yachts, sailboats and catamarans drop anchor in the city’s twin bays. In the summer months, Bodrum attracts a glitzy crowd and is known for its vibrant nightlife. The historic region is well-loved by yachting enthusiasts for its many idyllic hidden beaches, coves and bays.

A wonder of the ancient world

Anchor in one of Bodrum’s three stunning marinas to enjoy fantastic views of Bodrum Castle, which separates its two bays. A medieval fortress and UNESCO World Heritage Site, the castle was built in part with stones from the Mausoleum at Halicarnassus, one of the Seven Wonders of the Ancient World.

The Bodrum peninsula is pure sailing heaven, but it can get busy during the summer season. Opposite Bodrum city on the peninsula lies the gorgeous town of Türkbükü (also referred to as Göltürkbükü).

Drop anchor in the town’s stunning natural marina and explore the mandarin gardens, many hiking trails and Lycian castles, rock tombs and caves. You can also sail out to explore the many pristine beaches and beautiful islands in the region, including Apostle Island, Rabbit Island and Ada Koyu (Island Bay).

When sailing between the Dardanelles and the north of Greece, it is definitely worth dropping anchor to explore laid-back Gökçeada with its breathtaking natural scenery, rich history and charming mix of Greek and Turkish culture.

A chilled-out change from the busy and often overdeveloped Aegean mainland coast, serene Gökçeada is a picturesque volcanic island and a popular wind- and kitesurfing destination. The island, with its dense forests, wild thyme and oleander fields, white sandy beaches and crystal clear springs definitely deserves a place on your north-Aegean sailing itinerary.

Sail to Kaleköy on Gökçeada’s north coast, then explore the area’s many beautiful beaches and stunning stone villages from there. The historic Greek villages of Bademli, Dereköy and Zeytinliköy are worth exploring, as is Gökçeada Underwater National Park,

a national marine park situated on the island’s north coast.

The park is home to over 180 marine species, including the Mediterranean monk seal, dolphins, lobsters, sperm whales and sea turtles.

Kefalou Gulf and Alykes are Gökçeada’s two natural ports. According to ancient Greek mythology, these two ports protected ships from the rage of Poseidon, the sea god.

The turquoise Aegean Sea with its sunny islands, unique culture and ancient heritage is one of those corners of the globe you’ll want to revisit again and again.

If you enjoy long days of island hopping, exploring ancient ruins and hidden beaches, diving among shipwrecks and immersing yourself in the magical Mediterranean way of life, then set sail to discover the many wonders of the amazing Aegean Sea.