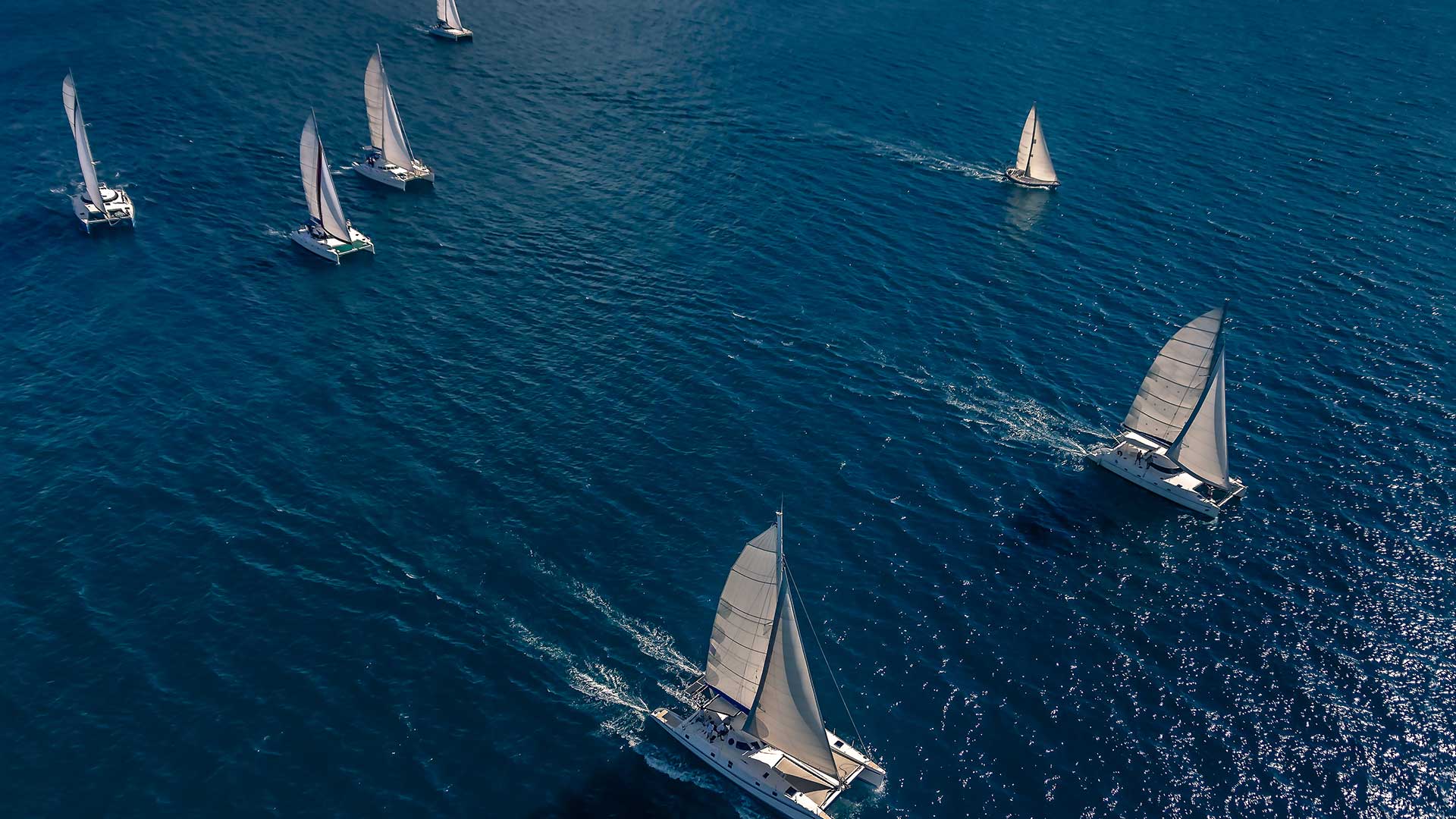 Catamaran vs Monohull - 6 Points To Consider Before Choosing Your Boat

Multihull or monohull? It’s an age-old (and ongoing) debate, and each option certainly comes with its own set of pros and cons.

Whether you’re thinking of investing in a boat of your own, or planning on chartering one for a sailing holiday, one thing’s for sure: the type of vessel you select will have an impact on your cruising experience.

Ultimately, what you intend to use it for will determine which type of boat would be best suited for the job.

In this article, we considered the aspects of space & design; safety; stability; speed; manoeuvrability and cost, so do read on for our comparison of the multihull catamaran vs the monohull sailboat.

THE CATAMARAN VS THE MONOHULL – A COMPARISON

1. STABILITY. WHICH IS MORE STABLE, A CATAMARAN OR A MONOHULL?

Fact – by virtue of having two hulls, both under sail and at anchor, catamarans are more stable than monohull boats.

If you are sailing with young children, seniors – or anyone who’s not all-too steady on their feet – a catamaran will provide you with a much smoother and stable cruising experience than a monohull.

Being multihulled, catamarans are not nearly as susceptible to the action of the ocean’s waves. This prevents them from heeling as much as monohull vessels would under the same conditions. As anyone who suffers from seasickness will tell you, this can be an enormous bonus.

What’s more, a cat’s multihull stability will also be highly appreciated by anyone prepping food in its galley (two hulls make for a somewhat more pleasant dining experience, too).

Lastly, because of its superior stability, walking around the deck (and moving around the interior) of a catamaran is much easier than it would be on a monohull.

The verdict? Catamarans are more stable than monohulls.

2. SAFETY. WHICH IS SAFER – A CATAMARAN OR A MONOHULL?

The inherent stability and natural buoyancy of a catamaran automatically increase its safety while out at sea.

As catamarans don’t have heavy, lead-loaded keels, they will remain afloat, even when (heaven forbid) they are holed. This is because most modern catamarans have such a large amount of buoyancy built into them that they are almost unsinkable, making them much safer than monohull sailboats in this regard.

Sure, catamarans can capsize, but being rescued from an upside-down, still-floating multihull is definitely preferable to sinking to the bottom in a monohull!

The verdict? Contemporary catamarans are incredibly buoyant and virtually unsinkable, making them safer than monohull sailboats.

3. SPACE & DESIGN. WHICH IS MORE SPACIOUS AND PRACTICAL – A CATAMARAN OR A MONOHULL?

Due to the boat's shape (and the amount of usable space each design allows), when compared square-foot-for-square-foot, every area of a monohull vessel is usually smaller than its catamaran counterpart.

Often, catamaran cabins are more spacious too, with cabins of even the smallest cat offering stand-up headroom. Catamarans are also generally more private than monohulls, and more straightforward when it comes to separating living spaces. This can be a significant advantage when you are cruising with children or guests.

If you’re a scuba-diving enthusiast, carrying all of your diving equipment will be easier on a cat. What’s more, catamarans have trampolines, which make them perfect for onboard sunbathing as well as stargazing in the moonlight – a big, romantic plus for sure!
Catamarans also have shallower drafts, allowing you to drop anchor closer to the beach than a monohull would.

The verdict? Compared square-foot-for-square-foot, catamarans are more spacious than their monohull counterparts. In terms of design, a catamaran is perfect for onboard sunbathing and stargazing and will allow you to anchor closer to shore.

4. MANOEUVRABILITY. WHICH IS EASIER TO STEER, A CATAMARAN OR A MONOHULL?

Most catamarans can turn 360 degrees within their own length, something very few monohulls are capable of doing. However, generally speaking, monohulls are quick to tack, more manoeuvrable, and quicker to respond to the helm than catamarans.

At the helm of a catamaran, you’ll get less feedback from the wheel than you would from a monohull. This will require you to be vigilant in rough conditions, and you’ll also have to know when to reduce sail. Compared square-foot-for-square-foot, catamarans are much lighter than monohulls, which means they also slow down a lot quicker.

For the most part, catamarans are easier to dock than monohulls, as they have two motors and two rudders which simplify things a lot. This also does away with the need for a bow thruster.

The verdict? We’re calling it a tie. Although monohulls are generally more manoeuvrable than catamarans, thanks to their two motors and two rudders, cats are easier to steer than monohulls.

5. SPEED. WHICH IS FASTER, A CATAMARAN OR A MONOHULL?

Although catamarans cannot sail as close to the wind as monohull sailboats, most cats do sail faster than a monohull on a reach.

On downwind runs, reaches, and broad reaches, in particular, catamarans usually beat monohulls when it comes to speed, going about 20% faster than a monohull (even outrunning bad weather when necessary!).

Another plus is that sailing a catamaran requires less physical exertion than sailing a monohull.

The verdict? Even if they don’t point as high into the wind, catamarans are faster than their monohull counterparts.

6. COST. WHICH IS MORE EXPENSIVE, A CATAMARAN OR A MONOHULL?

Generally speaking, catamarans with similar sleeping capacity and equipment are more costly than their monohull counterparts (both to own or to charter).

Just keep in mind that catamarans typically hold their value better and longer (and tend to be in higher demand) than monohulls. Comparatively, previously owned monohulls are cheaper to purchase than cats, as supply tends to outweigh demand by a large margin.

The verdict? Catamarans are more costly than monohull sailboats. However, a read-through of Points 1 to 5 might convince you that they are worth the extra expense.

CATAMARAN OR MONOHULL? – YOUR NEEDS WILL DETERMINE YOUR CHOICE

Looking at the list of pros and cons above, it would seem that the catamaran comes out the clear winner – at least when judged on aspects of safety, space & design, speed and stability.

However, your budget, the requirements of the people in your sailing group, as well as your own needs and preferences will all play a significant role in the boat you end up choosing.

Both catamarans and monohulls offer unique advantages, and whichever choice you go with, we wish you many happy ocean voyages and an abundance of adventure!

Ps. If you’re still unsure which option is the right one for you, why not check out the verdict from ocean adventurers who have lived aboard two monohulls and four catamarans over the past 25 years?