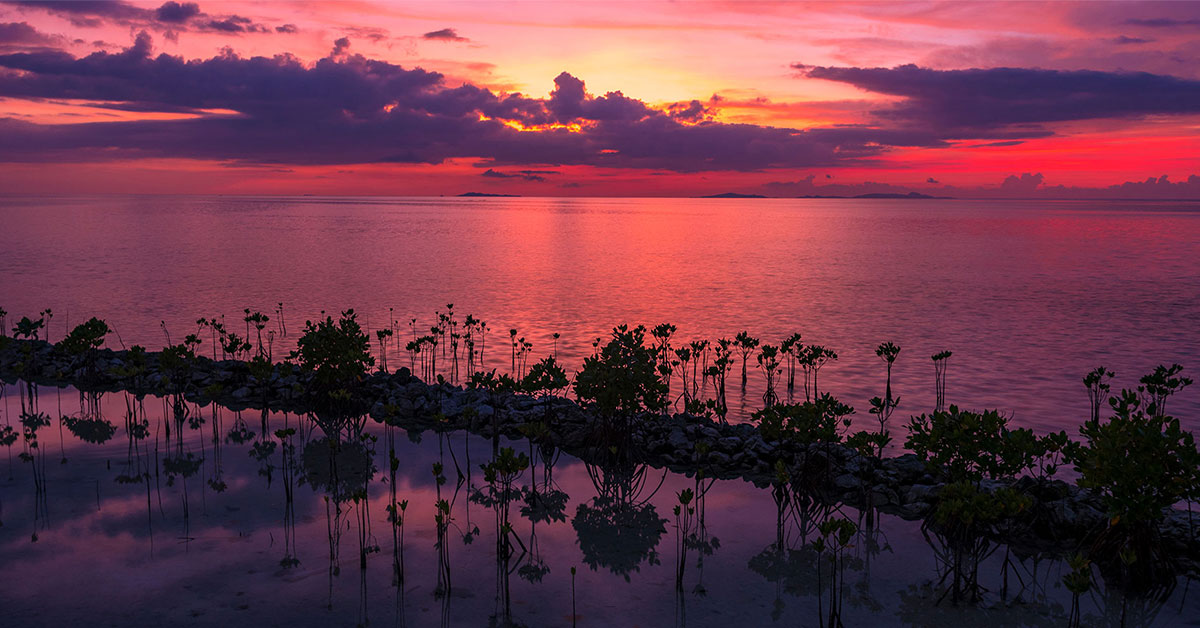 When it comes to post-lockdown sailing holiday destinations, remote is definitely the name of the game.

While the number of passengers on your cruise is easy enough to control, deciding where to drop anchor will require a bit more consideration, as the Covid-19 pandemic remains a global concern.

Taking off on a yacht holiday might seem like the ideal escape from this worldwide emergency. However, most island destinations still have cramped marinas, packed beaches, bustling eateries and thronging marketplaces to contend with.

With this in mind, we’ve done some research on where to find those extra-remote, off-the-beaten-route boating destinations that are guaranteed to offer you an unforgettable, yet safe (and socially distanced!) sailing holiday.

Read on as we explore three of the most breathtakingly beautiful and remote sailing destinations on the planet.

With fewer people per square kilometre than almost anywhere else on Earth, you’d be hard-pressed to find a more remote sailing spot than Australia’s vast, red and rugged Kimberley region (total population 34,364).

Far from the madding crowds, with thousands of islands dotting the area, remote and rustic Kimberley makes for an unforgettable and highly unique cruising experience.

THINGS TO DO WHEN CRUISING KIMBERLEY

Sail up the Hunter River to Careening Bay. Then, cruise into the mouth of the breathtaking Prince Regent River, past imposing sandstone cliffs and dramatic gorges towards the awe-inspiring terraced Kings Cascades rock formations.

Apart from the mesmerising sight of fresh water cascading over ancient rock terraces, you may even be lucky enough to spot some large saltwater crocodiles. Wildlife lovers and birders take note – the Prince Regent River is home to over 50% of the Kimberley region’s native bird and mammal species.

Feast on excellent oysters in Camden Harbour.  Historic Camden Harbour is the location of Kimberley’s first (short-lived) European settlement in the 1860s. From Camden Harbour, sail on to Kuri Bay, the area’s first pearling settlement and part of the Prince Regent Nature Reserve. Kuri Bay, known for its pearl-farming history, is home to resplendent marine life, including turtles, stingrays, sharks and giant saltwater crocodiles.

From Kuri Bay, cruise on to Langgi Bay to take in the incredible sight of the Petrified Warriors, a large collection of sandstone statues carved by water and time. These lifelike “statues” are said to represent warriors who lost their lives in a significant Aboriginal Dreamtime battle.

Fish for threadfin salmon and barramundi in Doubtful Bay. This idyllic, sheltered bay is a gateway offering access to numerous river systems to explore by boat, including the scenic Sale River which is ideal for estuary fishing. While in Doubtful Bay, don’t miss out on some excellent snorkelling and scuba diving among the rich marine life of Montgomery Reef, the world’s largest inshore reef.

This unusual,154-square-mile inshore reef that seems to rise from the ocean when the tide is falling forms part of the magnificent, 7,062-square-kilometre Camden Sound Marine Park.

Montgomery Reef is home to a variety of wading bird and marine life, including many whale species, turtles, black-tipped reef sharks, manta rays and dugongs.

This sub-tropical region is characterised by distinct wet and dry seasons. The best time of year to cruise Western Australia's Kimberley region is between the months of May and October, during the dry season.

This archipelago of volcanic, wildlife-rich islands situated right on the equator, off the coast of Ecuador, is perhaps most famous for being the inspiration behind Charles Darwin’s theory of evolution, as presented in his ground-breaking book, Origin of Species (1859).

There's just one airport among the Galápagos’ 13 main islands (there are also 9 minor islands, 39 islets and about 600 ocean rocks) and, while it’s possible to visit the area by staying on land on one of the inhabited islands, sailing the region is by far a superior way of taking in the region’s astonishing array of wildlife in their ecological habitats.

THINGS TO DO WHEN CRUISING THE GALÁPAGOS

See animals that are found nowhere else on Earth. Cruising the Galápagos, you’ll be able to view wildlife that’s entirely unique to the region. Think blue-footed boobies, Galápagos fur sea lions, Galápagos penguins, giant tortoises and the island group’s world-famous aquatic (or marine) iguanas – to name but a few!

Unsurprisingly, the area is a highly protected UNESCO World Heritage Site as well as a biosphere reserve.

Take in the underwater splendour. 97% of the land area of the Galápagos Islands comprise the Galápagos National Park, while the waters of the region are home to the Galápagos Marine Reserve.

This 133,000-square kilometre treasure trove (the second-largest in the world) of unrivalled underwater beauty is widely considered to be among the world’s 10 top diving locations, and it is possible to dive and snorkel in certain parts of the reserve.

Just like the mainland, the Galápagos’ surrounding waters form part of one of the planet’s most unusual ecosystems and is incredibly rich in biodiversity.

Indulge in once-in-a-lifetime birdwatching. The Galápagos region is home to 45 bird species that cannot be found anywhere else on Earth. On the islands, you’ll encounter Galápagos penguin, Darwin’s finches, waved albatrosses and blue- and red-footed boobies, to name just a few!

For some of the best bird watching in the region, visit Santa Cruz Island (famous for its variety of land birds), Isabela Island (to see the Galápagos penguin) and North Seymour Island (for frigatebirds and blue-footed boobies).

IMPORTANT THINGS TO KNOW BEFORE CRUISING THE GALÁPAGOS

When planning to visit this exquisite but highly protected region, you must familiarise yourself with all the governmental regulations for non-commercial vessels entering the area.

For example, private, non-commercial vessels are only allowed to visit the region's Protected Areas once a year, for a maximum of 15 days, with no passenger changes permitted during visits.

Also, there are no marinas in the Galápagos, and fuel provisioning facilities for yachts are only available on Baltra Island. It would be wise to do as much research as possible before cruising the region, as there are many strict regulations in place to protect this breathtaking, yet complex ecosystem.

Tip: Start the application process for all the necessary permits to cruise the Galápagos Islands at least two months in advance.

The consensus seems that weather-wise, there is no “bad” time to cruise the Galápagos Islands.

However, if you or any of your passengers suffer from seasickness, the time of year with the least wave action in the region is from mid-December to mid-May. Seas around the southern and central islands also tend to be calmer.

There will be fewer visitors to the islands in September, the first two weeks of December and between mid-January and mid-February.

If you are a scuba-diving enthusiast hoping to encounter whale sharks and large schools of hammerhead sharks, plan your Galápagos cruise for between June and December.

Avid hikers will find the cooler months between August and October more enjoyable for exploring the islands on foot.

This idyllic, sparsely populated 40 000-square-kilometre archipelago, situated off the northwestern tip of Bird's Head Peninsula in West Papua, is a breathtaking biodiversity hotspot.

Raja Ampat’s more than 1600 jungle-covered islands are home to more than 1500 species of fish, 700 species of mollusc, over 75% of the planet’s hard coral species and 50% of its known soft corals.

Although its incredibly abundant marine life and breathtaking topside scenery make Raja Ampat an incredible cruising destination, one of the best things about the region is its remoteness.

Cruising Raja Ampat, you may not spot another boat for days, even weeks on end.

If you’re not dropping anchor at any of the main dive locations, you may even go the entire duration of your cruise without seeing other visitors to the region. Cruising Raja Ampat, it is possible to respectively explore the archipelago's central and northern parts in a week, but cruising on a 14-day itinerary will allow you to explore this stunning region to the fullest.

Setting out from Sorong on the northwest coast of West Papua, you can cruise northwest toward the pristine Wayag Islands, situated on the opposite side of the equator.

Drop anchor in the tranquil, turquoise lagoons of these uninhabited, orchid-covered islands, where you can snorkel, scuba dive, kayak and paddleboard to your heart’s content. While you’re there, don’t forget to hike up Mount Pindito, the highest peak on Wayag, for some exquisite views of the region.

Then, lift anchor to cruise south to Penemu Island, which forms part of the Fam Islands.

At Melissa’s Garden dive site in Penemu, you will find some stunning shallow teal-tipped hard coral gardens to explore, by either snorkelling or scuba dive.

Misool Island boasts the highest level of marine biodiversity on the planet and is also home to Lenmakana Lake, a marine lake situated within a tropical forest. What makes Lenmakana Lake so remarkable, is that it’s teeming with a jellyfish species that has evolved (in isolation) to be completely harmless – its sting so mild that it’s undetectable.

THINGS TO DO WHEN CRUISING RAJA AMPAT

Dive Karang Bayangan on Waraket Reef. This hard- and soft coral-covered seamount on Waraket Reef, situated in southeastern Misool, offers some of the most spectacular diving in the region. Diving with the current, you'll likely be treated to the sight of schools of Spanish mackerel, chevron barracuda, sweetlips, jacks and many, many more. There is a cleaning station on the eastern side of this seamount where manta rays are often sighted.

If conditions are favourable, you’re in for a dive that will see you tick many amazing marine species off your diving bucket list!

Spot blacktip reef sharks at Wayag. Declared a shark sanctuary in 2010, Raja Ampat is one of the best places on the planet to observe the protected blacktip reef shark. You can spot these incredible creatures swimming just off the beach, along the jetty at the ranger station in Wayag.

Surrounded by lush plant life and crystal-clear, turquoise waters, this sacred cave with its many stalactite formations is protected by a shrine at its entrance.

The best way to explore the Tomolol cave system is with a snorkel, mask and floatation device. When it’s low tide and openings are exposed, a short swim will allow you to access many side caves and tunnels.

For the best visibility and calmest of waters, cruise the region between November and March.

When planning your post-lockdown sailing holiday, be sure to keep the coast of northwestern Australia, the Galápagos Islands and Raja Ampat in Indonesia in mind.