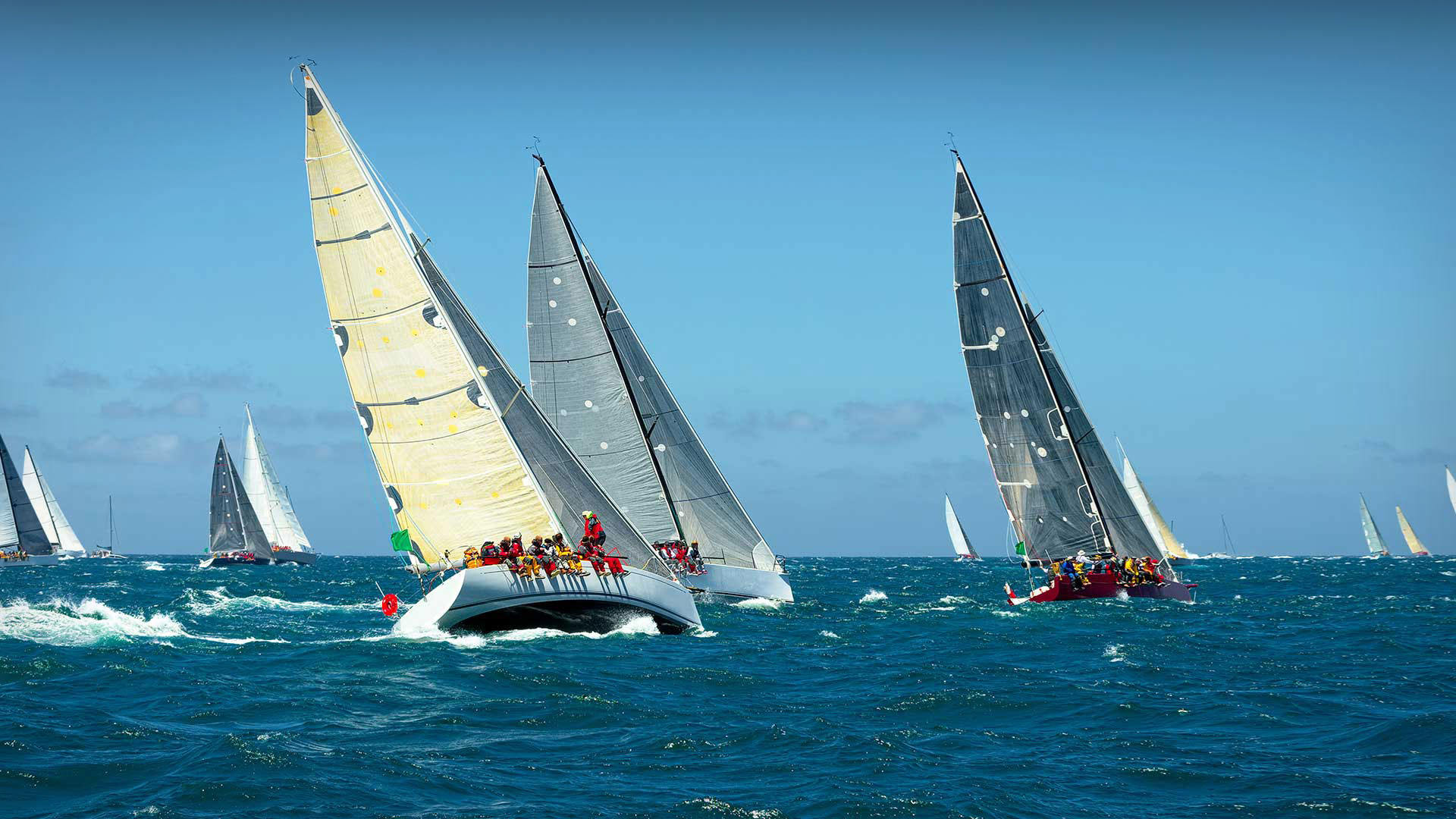 A LOOK AT THE WORLD’S 3 BIGGEST YACHT RACES

For some, embarking on a leisurely yacht cruise is the epitome of relaxation. For others, setting out on an ocean voyage is an epic, adrenaline-fuelled adventure, a ferocious match and an ultimate battle of will, endurance – and survival.

Join us as we take a look at the mechanics and history of 3 of the world’s biggest yacht races.

Also known as “the Everest of the sea”, the Vendée Globe yacht race is the ultimate ocean endurance test. The quest? Circumnavigating the globe by yacht, completely unassisted.

Named for the Département of Vendée in France (where the race begins and ends), the Vendée Globe was founded by Madagascar-born French deep-sea diver and yachtsman Philippe Jeantot in 1989. Since 1992, this world-famous round-the-world yacht race has taken place every four years.

The Vendée Globe is infamous for being an extreme and brutal quest of endurance and the ultimate ocean-racing battle. It takes place from November to February, placing contestants in the Southern Ocean during the austral summer.

To date, 167 contenders have braved the Vendée Globe. Of these, only 89 have managed to complete this punishing yacht race.

Only one sailor has completed the Vendée Globe twice: Michel Desjoyeaux, in 2001 and 2009.

In this yacht race, no one apart from the skipper is allowed aboard, the only exception being when a fellow competitor requires rescuing. This has happened twice in the race’s history. In the third Vendée Globe yacht race in 1996/1997, Brit Pete Goss rescued Frenchman Raphael Dinelli in the Southern Ocean. In 2009, Frenchman Vincent Riou saved his fellow countryman Jean le Cam after he capsized near Cape Horn, Chile.

Affectionately known as the Auld Mug, The America’s Cup is the world’s oldest consecutive sport and sailing event. Considered the pinnacle of yacht racing, this world-famous trophy is awarded every four years.

A best-of-13-race series, in America's Cup, the title defender yacht club faces only one challenger. The first yacht-club team to score a certain number of points is crowned the winner to become the prestigious title's newest defender. This sort of match racing requires years of preparation, millions of dollars – and very specific yacht-racing skills. It not only involves aggressive racing tactics; it also requires competitors to use the rules to put their opponents at a disadvantage to be victorious.

First awarded back in 1851 by the Royal Yacht Squadron for a sailing race around the UK’s Isle of Wight (the race was won by a schooner named America), the trophy was first known as the RYS £100 Cup. It was later renamed after the yacht which won the first race and donated to the New York Yacht Club. After that, The America’s Cup was available for perpetual international competition.

This prestigious yacht race attracts not only the world's top sailors and yacht designers but also wealthy sponsors and entrepreneurs. Taking part in The America's Cup is extremely expensive and requires strong fundraising and management skills. These days, taking part in this yacht race can easily cost more than $100 million.

The 2013 winner, Golden Gate Yacht Club from San Francisco, was said to have spent an estimated $300 million on taking part in the yacht race!

The America’s Cup yacht race is the oldest trophy in international sport. It predates the modern Olympic Games by 45 years.

Since the race’s inception in 1851, the United States embarked on what became the longest winning streak in the entire history of sport! The USA defended the trophy 24 times for a 132-year winning stretch from 1870 until 1983, when the Royal Perth Yacht Club’s Australia II took the trophy from the Americans.

Widely regarded as the toughest test in all of team sports, The Ocean Race is another round-the-world yacht race, held every 3 or 4 years since its 1973 inception. To date, there have been 12 editions of this brutal contest, with a combined 167 boats from 43 countries taking part.

Infamous for being one of sailing’s biggest circumnavigational challenges, The Ocean Race’s route changes with every race, including various ports of call. Competitors usually depart Europe in October to arrive at their final destination about nine months later, having covered around 39 000 nautical miles.

Initially named the Whitbread Round the World Race (after British brewing company Whitbread who sponsored the first race), it was christened The Volvo Ocean Race after the Swedish automobile manufacturer became the race’s sponsor in 2001.

The marathon ocean trial was renamed The Ocean Race in 2019. Recent editions of The Ocean Race had either 9 or 10 legs, with in-port races taking place in several of the stopover cities.

Each Ocean Race entry has a sailing crew racing round the clock – on certain legs, for more than 20 days at a time. Some of the trials these sailing crews face during their voyages include extreme temperatures varying from -5 to 40 °C, as well as treacherous sea conditions and intense fatigue.

Since the 2008-2009 edition of The Ocean Race, each competing yacht also has a dedicated media crew member aboard. This On-board Reporter (OBR) does not assist with sailing efforts, instead sending video and images to The Ocean Race headquarters via satellite – often from the middle of the ocean. Currently, the number of crew per competing yacht ranges between 7 and 10, depending on the gender ratio.

Current title holder: The 2017-18 Volvo Ocean Race was won by Dongfeng Race Team, a Chinese-sponsored Volvo Ocean 65 yacht. She had a crew of 14 and was skippered by Frenchman Charles Caudrelier.

In the 2008-2009 instalment of The Ocean Race, the route was changed from previous years to include stops in Asia and India for the first time. This yacht race reached a cumulative television audience of 2 billion people around the globe!

Harrowing as it may be, winning the Ocean Race will not bag competitors any cash prize. The accomplishment of taking part in – and completing – the race is said to be a sufficient award in itself.

Crews taking part in this yacht race mostly rely on freeze-dried foods for nourishment, resulting in a lighter – and faster – vessel. For the same reason, crew members will often only take one change of clothes with them on their voyage.

Riveting as they may be to witness, taking part in a gruelling, adrenaline-packed yacht race around the globe isn’t everyone’s idea of fun.

As expert boutique yacht builders, at Knysna Yacht Company we pride ourselves on creating one-of-a-kind, luxury semi-custom yachts for our clients.

Learn more about our beautiful multihulled Knysna 550 yacht here. Available as a cruising catamaran with an optional flybridge, this boat is built not only for comfort, but performance as well.