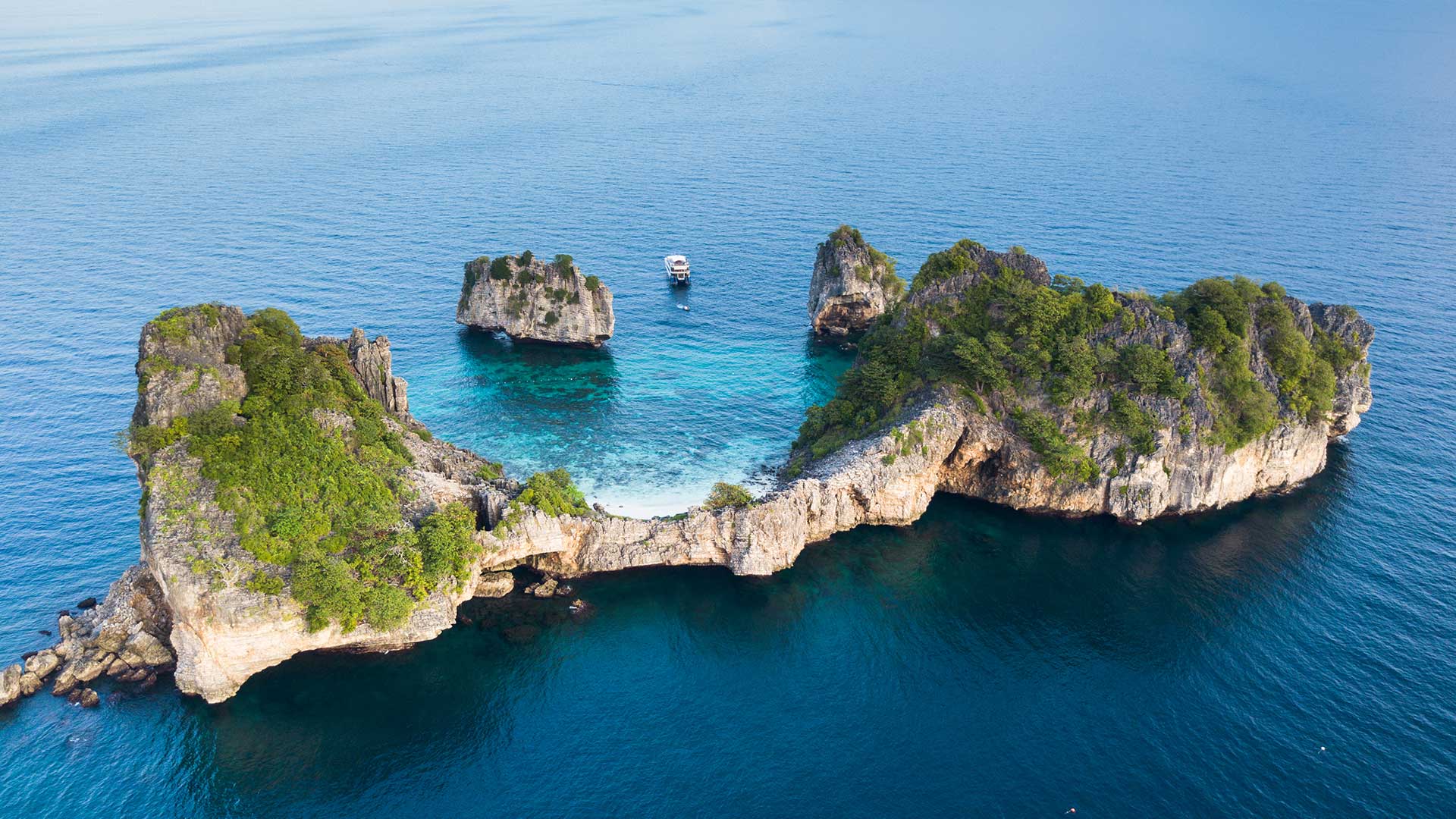 The plethora of breathtakingly beautiful locations which make up this corner of the globe offer visitors a wealth of history, mystery and natural beauty. To explore them all would take more than a lifetime, for sure.

Cruising this magnificent part of our planet will allow you to explore places that are otherwise impossible to access by land – think ancient, hidden temples; secluded beaches; breathtaking underwater cave networks; incredibly rare birds; prolific plants and wildlife and much, much more.

Join us as we explore three exquisite sailing holiday destinations in Southeast Asia that should be on every ocean voyager’s cruising bucket list.

The breathtakingly beautiful archipelago of Langkawi (officially known as Langkawi, the Jewel of Kedah) consists of 99 tropical islands located in the Andaman Sea, about 30 kilometres off the coast of mainland northwestern Malaysia.

An absolute cruiser’s paradise, these stunning, coral-rich islands are surrounded by warm, turquoise seas, forming part of the state of Kedah, which is adjacent to the Thailand border.

Of Langkawi’s 99 islands (for the record – an extra 5 are temporarily revealed at low tide), only four, Pulau Langkawi (think jungle-covered hills and picturesque paddy fields), Tuba, Rebak and Dayang Bunting are inhabited.

With its white-sanded, coconut-fringed islands, tropical rainforests, mangrove swamps and abundance of flora, fauna and birdlife, the Langkawi archipelago is famous for offering some of the best diving – and sailing holidays – on the planet.

The Langkawi islands are just perfect for languid exploration by boat, and there is as much to do on Langkawi Island as there is to do around it.

3 TOP THINGS TO DO ON LANGKAWI ISLAND

Drop anchor in Telaga Harbour Park, a stunning yachting marina on the waterfront at Teluk Burau, where you can spend a leisurely day exploring everything the bay has to offer. This includes an exhilarating cable-car ride to the top of Mat Cincang Mountain and the stunning Telaga Tujuh (meaning “seven wells”) Waterfalls, where you can take in the spectacular views and enjoy an exhilarating swim in some of the seven connected natural pools.

As a bonus, in addition to many shops, bars and restaurants, Pantai Kok’s modern waterfront marina also offers visitors a petrol station, bank and post office to make use of.

At the park, you will encounter an impressive array of wildlife, from swooping fishing eagles, bottlenose dolphins, monitor lizards and otters, to macaques and tree crabs hiding among the dense mangrove swamps.

If you’re an avid birder, plan your cruise to coincide with the migratory season (September until March), when you can spot many species of birdlife, including kite eagles, kingfishers and white-bellied fish eagles.

Be sure to experience the natural catfish spa, situated in the freshwater lake at Pulau Dayang Bunting. Here you can enjoy an all-natural pedicure, courtesy of the nibbling catfish population!

At Pulau Beras Basah, you can soak up the sun and enjoy the pristine beach and crystal-clear waters while keeping an eye out for some of the 350 resident golden brown eagles feeding on fish straight from the ocean.

Get out the snorkelling gear when you reach Pulau Singa Besar (Giant Lion Island). This stunning wildlife sanctuary island with its abundance of monkeys, eagles, hornbills, peacocks and monitor lizards is also known for offering some of the best diving in the region, if not the planet!

LANGKAWI: BEST TIME OF YEAR FOR A YACHT HOLIDAY

Due to its tropical climate, Langkawi is influenced by monsoons during its wet or rainy season, which falls between May and mid-November. The region’s dry season runs from December to mid-April, making this the best time of year to cruise Langkawi.

However, due to its sheltered location in the lee of Sumatra, Langkawi is also known as an all-year-round sailing destination. Hot and humid throughout the year, the region experiences minimal temperature fluctuations, as large amounts of rain are intercepted en route to Langkawi, causing less precipitation than in other Southeast Asian regions.

IMPORTANT: Take note that night sailing is not allowed in Malaysian waters. Anchorages must be reached by 4 pm, with daylight hours between 6 am and 6 pm.

With its balmy, tropical climate, rich history and abundance of endemic birds and wildlife, the culturally diverse, western-Pacific island nation of the Philippines (made up of an astonishing 7,641 islands) seems to have been created for exploration by boat.

This beautiful, megadiverse region, known for its resplendent land and marine biodiversity (and no less than eight major types of forest!), can be divided into four main island groups.

With their exquisite white beaches, lush palm jungles, many historical landmarks and abundant marine and land wildlife, the islands of the Visayas have long been sought-after sailing holiday destinations.

The Visayas are perfect for languid exploration by yacht, and day sails through the region are definitely the best way of exploring this stunning corner of the globe. The Visayas’ port of entry is Cebu City, while ports in Bonbonon, Carmen, Dumaguete and Leyte islands all offer mooring facilities for visiting yachts and sailboats.

Exploring the Visayas by yacht, you’ll be able to find a good place to drop anchor every night, while Cebu and the surrounding islands also offer some breathtaking anchorages – Romblon and Puerto Galera in particular are worth a visit.

3 TOP THINGS TO DO IN THE VISAYAS

Make a day cruise to Kalanggaman Island. On this little stretch of tropical heaven, the sandbar extends far into the ocean, like a natural bridge. Drop anchor off this untouched, sandy paradise for a day of snorkelling, beachcombing and ultimate relaxation.

Explore the underwater wonders of Malapascua Island. This tiny, one-and-a-half-mile long tropical oasis is world-famous for its incredible marine diversity. Snorkelling or scuba diving its multi-coloured reefs, caves and shipwrecks, you are almost guaranteed to spot the rare Thresher Shark, as well as manta rays swimming among the stunning coral gardens.

Take in the Chocolate Hills on Bohol Island. These mysterious, 1200+ grassy mounds are one of the Philippines’ most famous tourist attractions.

Spread out over 50 square kilometres; these conical-shaped hills turn brown during the region's dry season, resembling chocolate kisses (earning them the name “Chocolate Hills”). To this day, these formations are a puzzle to geologists. Some people believe these hills are natural wonders, while others believe they are human-made.

VISAYAS: BEST TIME OF YEAR FOR A YACHT HOLIDAY

The Philippines have a tropical climate, with a high incidence of typhoons. It has its rainy monsoon season between June and September, while its dry season runs from October to May. Most typhoons occur between June and October, making early January to mid-May the best time of year for yachting holiday in the region.

IMPORTANT INFORMATION: Take note that the US, UK and Australian governments all advise against travel to the Sulu archipelago and western Mindanao in the Philippines, due to the high risk of kidnapping of international travellers and the heightened threat of maritime kidnapping of small vessels.

Located on the west coast of southern Thailand, lush Krabi province, with its incredible natural beauty and hundred-plus tropical isles, is a bucket-list sailing destination for many ocean adventurers.

As many of Krabi’s beaches can only be reached by boat, the region truly is yachting heaven.

Much of Krabi province forms part of the 388-square-kilometre Hat Noppharat Thara-Mu Ko Phi Phi National Park, including many mainland beaches and smaller islands (including the Phi Phi islands, which were featured in the 2000 film The Beach).

With its crystal-clear waters and incredible abundance of marine life, the region offers visitors some of the best diving and watersports on the planet. With its coastal mangrove forests as breeding-grounds, the province is also a birder’s paradise – and the perfect place to spot sought-after bird species like the Chinese Egret, Mangrove Pitta, Great Knot and Nordmann’s Greenshank.

3 TOP THINGS TO DO IN KRABI

Explore quaint Krabi Town. Popular with visitors but less touristy than its neighbour, Phuket, this quirky little town at the mouth of the Krabi River is majestically positioned among breathtaking, angular limestone rock formations.

Drop anchor at Krabi River Marina or Port Takola Marina, then go ashore to explore this bustling little centre with its many shops, markets and eateries. While in Krabi Town, be sure to visit stunning Wat Tham Sua (Tiger Cave Temple). The temple consists of a warren of natural caves formed within a dense jungle and is one of Thailand’s most majestic natural wonders.

Experience the Susan Hoi Shell Cemetery. Unique to Asia and one of only three such sites in the world, Susan Hoi shell cemetery is situated close to Laem Pho village, about 20 kilometres from Krabi. This incredible 200 metre-stretch of fossilised shells in broken-up limestone slabs started forming around 40 million years ago. Initially a massive freshwater swamp full of water snails, due to climate changes, the shell layers became fossilised in limestone slabs which can be seen at low tide.

Dive your heart out at Koh Haa Yai. This stunning dive site with its unique scenery forms part of the Koh Lanta island district and is located within the 134-square-kilometre Mu Koh Lanta National Park.

Koh Lanta is home to several stunning underwater caves, the biggest of which is known as The Cathedral. Water visibility in this area is often over 20 metres, making for a superb diving experience where you may well find yourself swimming with leopard sharks, hawksbill turtles and whale sharks.

KRABI: BEST TIME OF YEAR FOR A YACHT HOLIDAY

As Thailand is very close to the equator, falling outside of the Indian and Pacific Oceans’ cyclone zone, it is classified as a year-round sailing destination.

However, the region does have two main seasons, the rainy season and the dry season (also referred to as the southwest monsoon and the northwest monsoon).

Krabi has a tropical climate, with temperatures averaging around 24 °C to 32 °C (75 °F to 89 °F) year-round. With no major weather fluctuations, any time of year will make for a pleasant visit, although the rainiest months are September and October.

IMPORTANT: Night sailing is not allowed in Thai waters. Anchorages must be reached by 4 pm, with daylight hours between 6 am and 6 pm.

It’s no mystery that Southeast Asia is such a popular yachting destination.

With its glorious tropical climate, palm-fringed islands, abundance of plants and wildlife and countless idyllic bays, coves and coral reefs to explore, it’s truly the stuff that boating dreams are made of – and just perfect for an absolutely unforgettable sailing vacation.

Keep this sublime corner of the globe in mind when planning your next yachting holiday – it definitely deserves a spot on your sailing bucket list!